As I came out of The Green Fairy, my neighbordhood’s associative coffee shop, I was hit by a ray of light, and needed to stop for a few seconds. I’d spent the night drinking, some home-made beer a friend had been brewing for the past months, and let me tell you, it was one of the finest beer I had recently. The sweet aromas of orange and cinammon were very welcome, but now I had to pay their price.

Thankfully, this coffe shop is my little retreat. It’s not really a coffe shop actually, every one that comes in takes turns in opening and taking care of it, but nobody will serve you here. You can find couches, a kitchen, and it’s up to you too make your food and stuff. I can stay there as long as I want, and usually just sit on a chair in the courtyard behind the building, listing to the birds sing, the sound of the water and people discussing around me. In winter, the brick walls stay dry and warm, birds come for refuge, chirping as the sun rises.

Anyways, today I wasn’t able to stay all afternoon as I usually do. I needed to see my friend Jules. He had gathered with a few friends to reopen a old building downtown, and they where starting to put a hydroponic system in place to grow their own food. There first though was to connect to the water grid and use a pump to bring water, but we wanted a better and more autonomous system.

During my time in France, I had the chance to come across a collective that wanted to open-source agriculture, and try to simplify the tech we use. I learned a few things about punching holes in PVC and bamboo pipes. But today, I was gonna be useful, even without a drill.

When I was 5, my grand parents bought me and my sister a bike for christmas. It had litte wheels on the side, and I went around the house and the garden with a big smile. The day after, we went to the closest parc, and since then I haven’t come off my bike’s saddle.

I started walking toward the docks, only a few minutes away. I left my bike there last night, cause I wasn’t really able to ride it, if you see what I mean. I turned left on Proudhon street, and I arrived in front of a big warehouse. You could see a huge painting on the facade : a bicycle wheel with plants and flowers growing around it, painted by a crew of local artists and squatters, a few years back. Behind a big door, Mike was waiting for me. Mike’s a cool guy. He’s part of a collective who lends small four-wheel bikes with trunks to move stuff around. The solar panels on the roof power the electric batteries, so even people that aren’t very strong can move their cats and dogs around in the city. While I was lost in my thoughts, Mike slid the door open in front of me.

As I passed through the door, everybody went silent. Mike looked at me, eyes wide open, and stared for what felt like an eternity. He started laughing, laughing so hard that everybody followed, and I was dazzeld as to what was happening.

“You didn’t take a shower last night did you ? ” He asked.

“Go look at yourself in the mirrow”, he said, in tears.

Fuck. My friends drew a huge fish, right in the middle of my forhead, again. The’re getting better at drawing fish, I thought, as I was cleaning my face.

Mike told me to come see him in the back of the warehouse as I was whiping off the last bits of ink. He had prepared my ride for the day. I had the black-and-white stripped trike ! It also had a big eye painted on the back, which I always found funny because it made me think of the way some butterflies have “eyes” on there wings to scare birds. We painted the eye to scare cars !

“As always, you’ll need to bring it back and service it with Thapelo, they’ll be the one in charge this afternoon…”

“No worries Mike, you know how I drive !”

“Yes that’s what worries me…”

I took the keys of the trike, and said goodbye to everyone. I pressed on the pedal as I started to roll.

I left the docks with my trike, and decided to take the bike lanes on the side of the river. The trees shade most the ride from the sun, and delicatly brush in the wind. I always like to see people rowing and swim, now that the rivers are clean. I never though I would of seen that one day, but it took only three years to get clean, and fish have now started to come back.

I followed the river until I got to the new communal center, made a turn, and rode further into the city. As I arrived near the 20th district market, I stopped, and parked by bike.

I heard that a new bamboo pipe shippement had arrived, and I wanted to get a few for the hydroponics system. I also wanted to go see the gardener’s corner to get a few seeds and, if I could find it, a hop plant. I’ve got a projet brewing in my mind for that one. The market in itself was in a huge hall, made of cast iron. It was all painted red, in rememberance of the blood people spilled building it at the time. It had a glass roof that provided a lot of sun all year round, and in the winter, big curtains of vibrant colors where put up during a small festival in the first week of november. Every family, collective and there friends make the curtains and restore the old one during the party, and at night it becomes a huge music-hall… I love this place, sometimes when I go through it, I can almost hear last year’s music in the back of my head. I was arriving to the building section of the market.

Indeed the bamboo pipes had arrived. I took a few, and asked if someone wanted to help me move them to my trike. A young person smoking a cigarette told me that they would be there in a minute. I offered to teach them how to make a herbal cigarette with minth and hazelnut leaves in exchange.

Moving the pipes was the easy part. We just took each pipe on each side, and stacked them on the roof. I was wondering if the tryke could hold the weight, but what really worried me was hitting someone while turning. I guess a small red cloth will do the trick, I hope…

Once the pipes where loaded, we sat down. I had a small bag of smoking herbs, and handed them a small batch. It was a 70% hazelnut and 30% minth mix, but I explained you could mix it to your taste. We shared a cigarette and went each our ways.

Now, for the best part of my day : the gardener’s corner. It’s filled with the most exotic plants, and, among other things, you can find a few herborists that have some of the best teas to cure the worst hangovers. At the entrance, you can spot a big pot of boiling water, where you can make yourself tea. I went to exchange a usb key for a few herbs.

I took my usual, and asked around for a hop plant. An old woman, who traveled half the world after feeling her home in rural East Asia told me about a Berliner that had a few plants she grew in her garden. My german wasn’t that good, but I managed to update her computer in exchange for two hops and a morning glory.

After loading all of that in my trike, I pedaled to the building my friends had opened. It was an old, grey building that was once home to a horrible police departement. When the last officer of the city gave his gun back, the bulding closed, and nobody wanted to do anything with it. Until recently. It wasn’t very welcoming, but flowers were starting to bloom all over it… The parking had been destroyed and upgraded to a garden. My morning glories where soon going to be climing all over the walls. Someone was playing guitar and children where learning how to make a wind turbine. 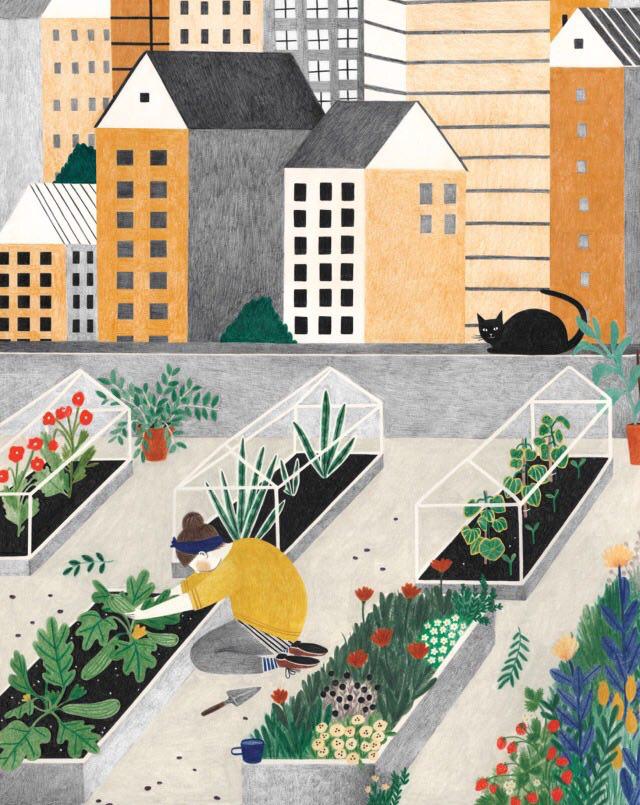 As I unloaded the pipes, Jules shouted at me from the roof : “There you are ! We thought that you got lost in the gardener’s market again !”

“Not today ! Come help me bring all of this upstairs instead of standing in front of my sunshine !” I shouted back jockingly.

Bringing the pipes up to the roof was not easy, even with ropes. They were pretty heavy, but they especially moved around so much that we nearly smashed a window. It took us the best of an hour.

Once all of the pipes were on the roof, we started measuring them to fit the water irrigation system we designed. Two buildings next to ours had big tarpaulins that fed into pipes, that connected to a big water tank on our roof. The system could store quite a bit of water, which would be good enough for most of the year. From that tank, we needed to bring water to the different parts of the roof, and the different plants. 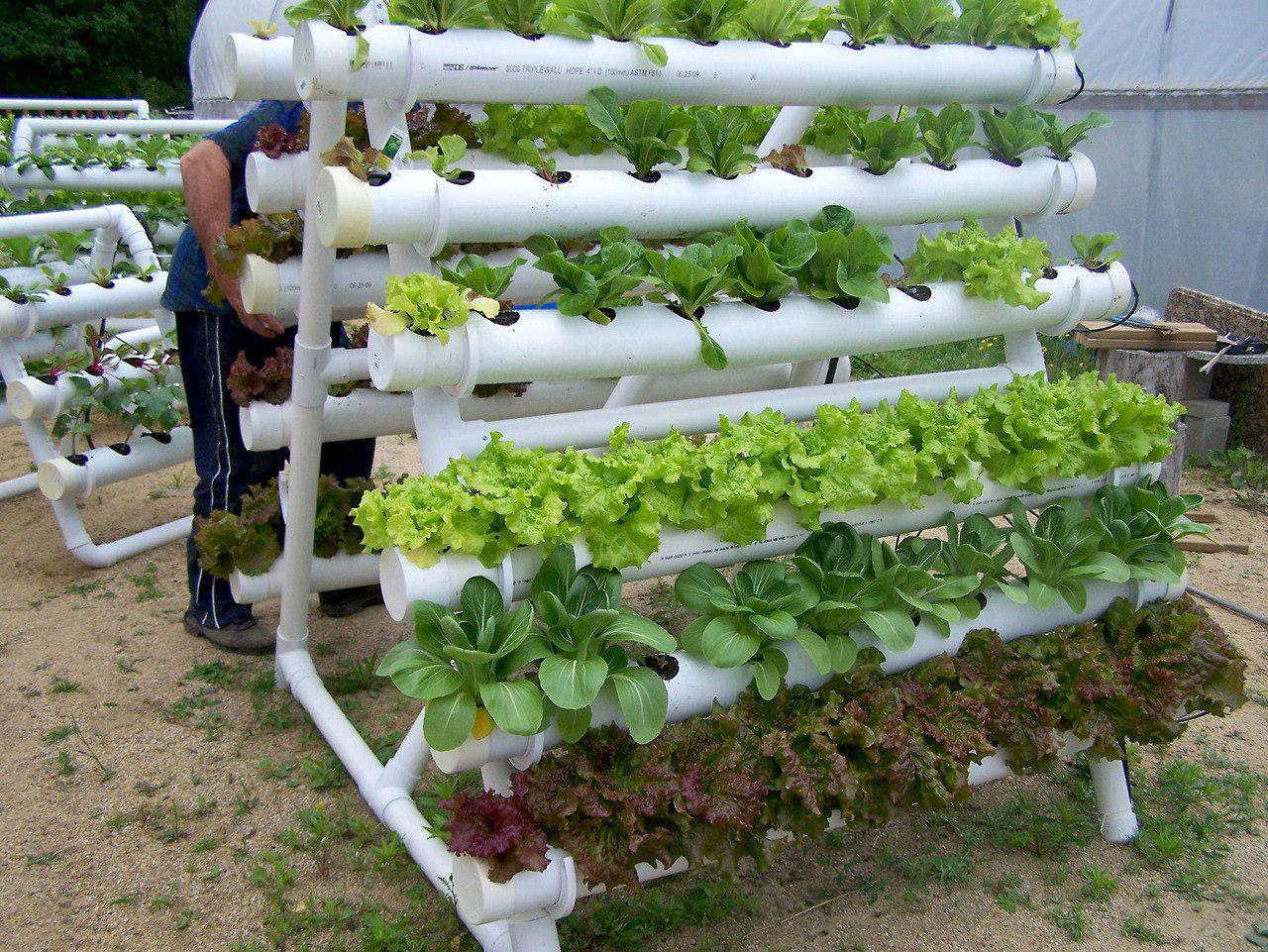 Naseem, a friend of Jules, had studied electric-less water control systems and came up with something truly ingenious : a small black glass contraption. When it’s heated by the sun, it creates a void that pumps up water from the tank into a Pythagorean cup system. Gravity then pumps water by itself. It took me some time to understand exactly how it worked, it seemed like magic for me.

When it’s raining, no need for water, and went it’s cold, it takes more time for water to evaporate, so it’s fool-proof year-round.

The difficulty lied in calibrating the system, and that’s what took most of the evening. It was interruped by a water battle and a few water bombs from the kids downstairs, but we fought back with water guns !

As the sun went down, we started to feel tired. The sun had been shining all day, but the LEDs were now starting to turn on, and it was becoming harded to see what we where doing… I headed to the cellar where a few jars of grass, a welcoming present from the couple down the street. When I came back up, everybody had stopped working. I offered everybody to have a joint, and someone brought out a guitar. Why is there always a guitar ?! The barbecue was well under way, and everybody needed to rest a little before eating.

I climed to the top of the water tank, and, as I was sparking up, I admired the sky, where the setting sun had drawn big orange strays.